A Diagnosis at Last 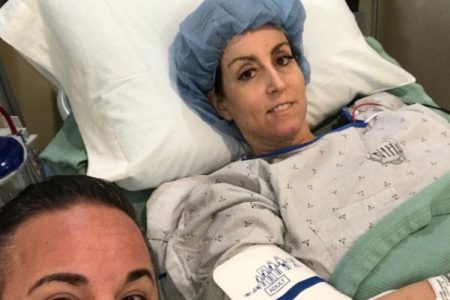 Heather and her partner, Deano

Heather struggled with chronic illness and multiple hospitalizations for five years. But her doctors couldn’t figure out what was behind the 45-year-old Connecticut woman’s many unpredictable symptoms, which took both a physical and emotional toll and robbed her of her job security.

But last fall, Heather’s hematologist reached out to a colleague at the National Institutes of Health. Three weeks later, she headed to her first appointment at the nation’s largest research hospital, the NIH Clinical Center.

The initial consultation brought Heather hope. For the first time, she had a comprehensive diagnosis – hypereosinophilic syndrome, or HES, a rare blood disease that can cause damage to organ systems,most commonly the skin, lungs, heart, and nerves, although any organ can be affected. It can be progressive and cause serious illness or death if left untreated, according to her doctor, Paneez Khoury.

Along with the diagnosis, Heather had the chance to enroll in a clinical trial. But being a single mother of two and her family’s only bread-winner, the prospect of returning to the NIH for full-time treatment seemed financially unattainable, she said. Despite that, and an already substantial pile of medical bills, “I had no choice but to go,” Heather said. “I needed to start treatment and move forward.”

In doing so, unfortunately, she suffered a financial setback – losing a job she was to start in December. As Heather searched for resources to help her make up for the new job loss, she found Friends at NIH. “They offer many kinds of support,” she said. “The most immediately helpful for me was financial assistance.” Through the support of generous donors, Friends at NIH supplements the cost of Heather’s mortgage, allowing her to participate in a potentially life-saving treatment protocol.

So far, Heather’s treatment has been successful, normalizing her unstable blood cell counts and relieving many of her symptoms. There’s a chance that the improvements could plateau or that her condition could worsen again, she says. But even if that happens, Heather is optimistic that there are more treatments and trials at the NIH available to her.

Since her treatment, Heather has since returned home, where her NIH physicians can monitor her blood counts remotely. She’s confident in her pursuit of job opportunities and optimistic about the future of her health, well-being and ability to care for her family.“I hope that my story can provide an example of the direct impacts that [donors to Friends at NIH] and their support can have on individuals like me,” she added.

About Rare Diseases
HES is categorized as a rare disease. Combined, rare diseases affect an estimated 25 to 30 million Americans. There are more than 6,800 rare diseases and the NIH investigated 534 last year. Join the NIH for Rare Disease Day, March 1, 2018, at its annual public forum.