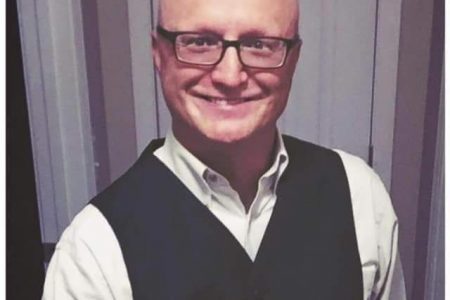 Aaron H. has suffered from a rare genetic deficiency since he was two years old. His entire life, he had numerous pneumonias and other serious illnesses, yet he didn’t know why. Then, finally he was was diagnosed with Rag 1 deficiency at the NIH six years ago.

“It’s a huge relief to know your enemy for what he is,” Aaron said. Since his diagnosis, Aaron has faced his enemy head on in spite of the toll the disease has taken on his health and the scarring in his lungs. 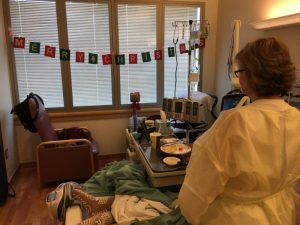 Aaron’s sister, Lorraine, at his side, celebrating Christmas in July!

A big enemy calls for bold treatment and a strong team. Aaron is part of an innovative bone marrow transplant protocol that has been ongoing for four years that transplants people with a wide range of immune deficiencies, explains Dr. Kanakry. “The results have been very good overall and will soon be published.”

Aaron had the bone marrow transplant in March. Fortunately, his medical team is bolstered by strong family support. His sister, Lorraine and brother, Jonathan, have
stayed by his side, even sleeping in the waiting room through his transplant and worrisome nights when he landed in the ICU due to complications, as Aaron fought for his life. His brother, Monroe, also visited, and took on major responsibility to care for their elderly parents at home to ease the burden of being away from home.

“As a family, they have provided that continual moral support and sometimes tough love that we can’t constantly provide. They also advocate for him and point out issues we didn’t pick up on. Honestly, if it wasn’t for his family being here, I don’t know if we would have gotten him through,” said Dr. Kanakry.

The family is exceptionally close – geographically and by vocation. Aaron is a minister, retired due to his health. Also, his father, brother Jonathan and Lorraine’s husband are also ministers. Lorraine explains they are held closely together by their faith and love of laughter. “He has a powerful positive outlook on life. He likes to laugh. You know he’s in a crowd.” 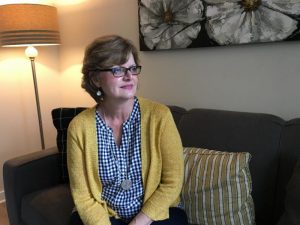 Lorraine at The Flats, Friends’ apartment near the NIH

Lorraine and Jonathan didn’t know anyone in Bethesda when they came from the small town of Easley in South Carolina to accompany Aaron through treatment. The high cost of hotel rooms in the area were prohibitive and added to their emotional and financial stress.
Aaron’s social worker connected the family with Friends at NIH, and through the generous support of donors, we were able to place the family members in a nearby apartment, free of cost, for their extended stay. They rotate weekly being at Aaron’s side. “It puts a lump in my throat. You have no idea how grateful we are to have a place to call home,” Lorraine adds.

Dr. Kanakry says Aaron is getting closer to leaving the Clinical Center every day. The lung damage he suffered prior to treatment is not reversible, she says, but in spite of the complications, he’s been gifted an entirely new immune system – and like his family support and the help provided by Friends at NIH – that counts for a lot.