Daniel’s Story – The Gift of Housing 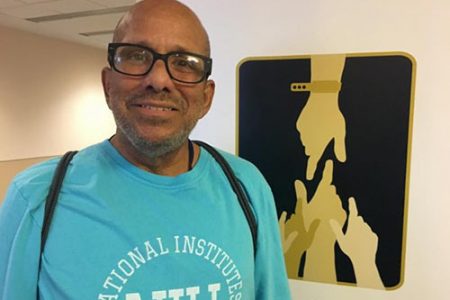 Cooking is Daniel’s passion and work. A chef and restaurant consultant from Lawton, OK, Daniel, 53, is stirring up a special stovetop meal in the comfort of an apartment, sponsored by Friends’ donors at The Flats 8300 near the NIH campus. Daniel feels good and says standing, including at the stove, is part of his physical therapy program “homework” to strengthen his legs.

Daniel participates in a National Cancer Institute treatment protocol. He spent nearly three months inpatient at the NIH Clinical Center. Then Daniel’s physicians prescribed a two-month outpatient intensive physical therapy program to help him regain his strength because he couldn’t go home in his weakened condition and barely able to walk. But staying in the Bethesda area where hotel and short-term apartment rentals rates are far higher than in Oklahoma would have been financially impossible for Daniel were it not for the support from Friends at NIH. He has stayed in a Friends’ sponsored apartment near the NIH, free of charge, and he adds, free of noise, for seven weeks.

He’s grateful that his journey from the Oklahoma Medical Center landed him in an NIH study after his cancer diagnosis last year. “I don’t think many doctors around the country know what an amazing place the NIH Clinical Center is,” he said. “The doctors and services, especially physical therapy, are the best.”

The youngest of seven siblings in a military family, Daniel had returned to Oklahoma in 2003, where he was born, to take care of his elderly parents. Both died within five weeks of each other in 2015, and then his own illness struck, robbing him of his health and livelihood.

“This support means everything to me –EVERYTHING,” he says emphatically. “The Flats is a wonderful place. They are pet friendly and to me that means a lot. I enjoy seeing the dogs. The grocery store downstairs is a big help. I could never have afforded staying here without this support.”

Daniel is proud that he’s in an experimental treatment trial that will likely benefit many others. “It’s wonderful if something that works for me will work for others too and like me, bring them back to life.”