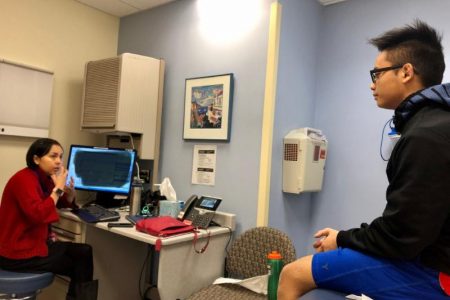 Four years ago, Dr. Marcela Ferrada faced a promising career as a critical care and infectious disease attending physician at both the National Institutes of Health (NIH) Clinical Center and Johns Hopkins. She had attained her goal after completing dual fellowships at the two prestigious medical centers.

Then she got very sick. Her diagnosis of Relapsing Polychondritis, RP, a rare, and in some cases fatal, autoimmune disease characterized mainly by recurrent inflammation of the cartilage in the body, would change her life and professional aspirations forever as she would redirect her career to researching the disease.

Looking back, she’d had baffling symptoms that waxed and waned for many years. After having a baby, the symptoms increased dramatically. She lost weight quickly which she thought was explainable because she’d run a half marathon four months postpartum, but soon joint pain, particularly knee swelling, was troubling. She developed a cough so severe, it disturbed her sleep and she broke a rib coughing. From a family of doctors, she says no one figured out the cause. 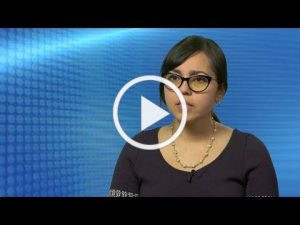 Then an NIH rheumatologist diagnosed her with RP. Dr. Ferrada is working on a project with Dr. Peter Grayson and others at the National Institute of Arthritis and Musculoskeletal and Skin Diseases (NIAMS) on Relapsing Polychondritis. She’d never planned to be a researcher, but “never say never,” she laughs.

Dr. Ferrada read the literature on her disease and soon discovered RP was written up in 1923, but the data were old, and the mortality rate described as very high – which she didn’t believe and didn’t want to scare or deter her.

To learn the skills necessary to study the disease, Dr. Ferrada first completed an additional fellowship at NIH in rheumatology. One of the biggest challenges of the disease, she says, is that there are no biomarkers or blood tests to diagnose RP.

One of Dr. Ferrada’s goals in spearheading a multidisciplinary study at the NIH is to provide the basis for classification criteria so doctors understand the disease from its varying symptoms (which can affect ears, trachea, nose, heart valve and lungs, to
name a few), to explore causal and genetic associations, and hopefully to find better treatments. Dr. Ferrada’s mantra is “where there is research, there is hope and we have research.”

After her diagnosis, Dr. Ferrada embarked on a tour of ten hospitals’ grand rounds to lecture about the disease. On more than one occasion, physicians spoke up about patients who had presented with baffling symptoms they now believed to be RP.

At the NIH, Dr. Ferrada works with a multidisciplinary team who are evaluating RP patients from all over the world. She says the NIH study is unique because “we have the capability to study the disease prospectively in a systematic way, evaluating many patients over time.”

The NIH investigative team is collaborating with a consortium of international physicians from Canada, Japan, Spain, Italy, France and India. “Most of the studies elsewhere are retrospective which is a challenge because critical information may be missing,” Dr. Ferrada notes.

Intensely passionate about her work, Dr. Ferrada says that she is very aware of the biases she confronts by having the disease herself. She keeps a recording of her symptoms, and lets it guide her in studying patients, but she never says ‘I have this symptom, so this patient must have it too. I approach every patient objectively.’

Currently there are 90 patients in the NIH RP study with more than 100 more expected to enroll.