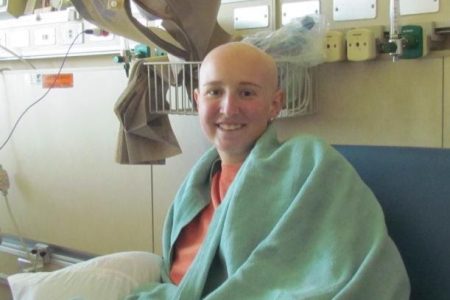 Meet Madalynn, 22 years old from Woodsboro, TX.
A young mother of a baby girl, a student, and a Texas hurricane survivor.

Not typically, Madalynn has remained hospitalized for 51 days but hopes to join her family soon (her mother and grandmother rotate as caregivers) who are staying in a Friends’ apartment. NETE, or NET ESolutions, a McLean, VA based company, recently kicked off sponsorship for the apartment to support patients and families for the coming year. 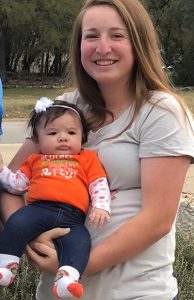 Madalynn’s journey with this rare genetic disease has taken numerous turns as she lacked a diagnosis for years. She’s had symptoms since she was 13, but was diagnosed only three years ago. GATA 2 makes a protein that plays a role in making red and white blood cells and platelets in the bone marrow, and when deficient, causes symptoms much like a blood cancer.

When told of the BMT treatment trial at the NIH, Madalynn thought it was “crazy to travel across the country for treatment,” but after a lengthy hospital stay in 2016, she changed her mind. No one in her family matched to be a donor, so Madalynn went to the donor bank — Be The Match. It would take more than a year to find a match.

In the meantime, in August 2017, Hurricane Harvey hit Texas and wiped out Madalynn’s parents’ farm. “My parents loaded up the pigs and the dogs and escaped, but we lost the house, and one of the barns,” she said. “It was terrible to see the places where people had lived, they were all gone. They couldn’t get the cotton out of the fields so there was cotton everywhere. It looked like a snow storm.”

Later that year, Madalynn got the call with the good news that a match had been found. Her next stop was a fertility clinic to harvest eggs to preserve her fertility since the treatment would involve chemotherapy. Then came a surprise. “I learned I was pregnant with my beautiful baby girl, so I had to call the NIH and tell them I wouldn’t be coming for a while!”

In February, this year, as the baby was 6 ½ months old, Madalynn had the bone marrow transplant. “It was rougher than I thought. You have to stay positive and find something to look forward to. I have my daughter to go home to.”

Madalynn thanks Friends at NIH donors for supporting her family with a comfortable apartment. “I didn’t know how my Mama and Daddy would find the money to be here. I’m thankful from the bottom of my heart.” After treatment and waiting, Madalynn looks forward to finishing school to become a sports therapist, getting a job and raising her daughter – all close to the home she loves and misses in Texas. For her, it’s all about embracing hope. 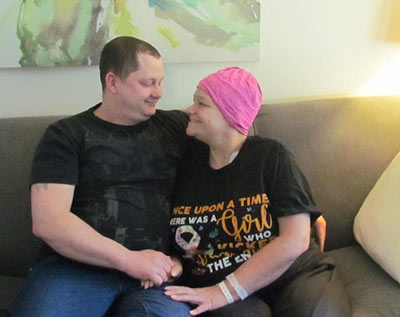 38 days! Rebecca also counts down the days to when she can be reunited with her family in Pennsylvania. She too had a bone marrow transplant for GATA 2 Deficiency. For the present, she’s happy, even with good days and bad, to be outpatient and staying at one of Friends’ apartments near the NIH being lovingly cared for by Timothy, her fiancé.

Her “treatment, waiting and hoping” involve wedding plans, but she’s not focused on that for now. “I’m not going to get married,” she says with a smile, “until my hair grows back.”

Rebecca’s children were tested as potential donors. Fortunately, her 23-year-old daughter, Desiree, was a half match, as well as her sons, but further testing revealed both sons also have GATA 2 Deficiency. They are currently symptom free, and Rebecca reports the NIH will be monitoring them. Uniquely, Desiree donated enough bone marrow for her mother, her brothers , should they ever need it, and for Rebecca’s sister who also has GATA 2.

When asked, Timothy jokingly attributes Rebecca’s progress with his diligent caregiving. In reality he admits it’s hard work, but there’s no place he’d rather be than with her during this time making sure her needs are met and that she’s protected from doing too much. He gave up his job as a machinist to accompany Rebecca during her treatment.

This week the couple celebrated the anniversary of their first date. “What did we do?” Timothy quips. “We played cards. I didn’t want to take her out to be exposed to get sick.” 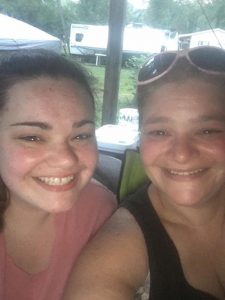 Rebecca says Friends’ support of the apartment has been important to her recovery. “It’s a different mentality getting out of the hospital. Being here makes me heal faster, gives us a little bit of privacy. And being so close to the hospital is comforting, in case I pop a fever, or my line comes out. Then she emphatically adds, “Maryland is so expensive, we could have never afforded this place!”

In 2018, Friends at NIH provided families 928 nights in our apartments near the NIH Clinical Center. At average per diem rates of hotels in the area, @$150 a night, this saved families, $139,200. The need is great, and the waiting list is growing! Please consider making a donation and help us do more. Call us if you are interested in providing a corporate sponsorship. (301) 402-019. Thank you.